How to Help Animals

Abandonment, abuse, murder and inappropriate keeping of animals are banned in the Republic of Croatia by current laws and legislation

Depending on the type of offense, certain government bodies are responsible for sanctioning the offenders.

Animal Friends and other associations are non-government organizations and as such, have no official power, like any other citizen of the Republic of Croatia.

We have no authority to enter someone else's property, seize any animals, nor do have we the authority to convict the perpetrator of the civil and criminal offences. The power to do this lies with government bodies and their employees. The list of most frequent problems that the citizens call us about follows, as well as the instructions on how and who to contact.

Keeping in inappropriate conditions/neglect/abuse/abandonment of animals

When it is about the immediate endangerment of an animal’s health and life and serious abuse (all forms of physical abuse), you should inform the police as soon as possible and they will prevent further abuse of the animal, and if it is about torture and/or killing the animal, they will submit a criminal report. The criminal report can also be submitted by a witness to the torture/abuse of the animal or a person that has some knowledge of it, and this should be done in writing to the Municipal State Attorney. You should enclose as much proof as possible to the report, which can be used to prove stated facts (photos or videos, witness statements, autopsy report, veterinary documentation).

Article from the Criminal Code that deals with convicting animal abuse and killings:

(1) Whoever kills an animals without justification or seriously abuses it, inflicts unnecessary pain or unnecessary suffering,

shall be punished by imprisonment of up to one year.

(2) If the offence from paragraph 1 of this article is done out of greed,

the perpetrator will be punished by imprisonment of up to two years.

(3) A person who withholds food or water out of negligence, or in some other way causes the animal suffering over a period of time,

shall be punished by imprisonment of up to six months.

(4) The animals referred to in this article will be seized.

In the event of animal neglect (food, unsuitable accommodation, chain cutting into skin, clearly sick animal, doubt that the animal has not been vaccinated for rabies etc.) you should send a written report to the veterinary inspection where you should list as many details as possible that prove that the Animal Protection Act had been violated. It would be good to enclose as much proof as possible such as photos or videos, witness statements, and veterinary documentation.

The report should contain all the personal information of the report writer, perpetrator or animal owner, as well as witnesses who can confirm your claim from the report. Important: anonymous reports usually do not get considered. If you wish to remain anonymous because you believe that the person being reported could violate your safety, point out in your report that you wish to remain anonymous towards the reported party. This way the inspection can contact you as a witness, but they won't give your details to the reported person. If the report is about a dog and there is reasonable doubt that he hasn't been vaccinated, you should also stress this, and at the end of the report you should ask to be informed of the outcome.

The veterinary inspection should also be informed about any other Animal Protection Act violation such as poor conditions in pet shops, slaughtering of pigs without prior stunning, inappropriate keeping of so called domestic animals and so on.

Abandonment of animals, which is punishable by the Animal Protection Act, should also be reported to the veterinary inspection.

Abuse, neglect or animal abandonment for the district of Zagreb area can also be reported on pages of the Info Center Dumovec.

According to the Criminal Code and Animal Protection Act it is an offence to withhold food and water from animals. In these situations you should first call the police, especially if the animal’s life is in danger, and it is beneficial to write a report to the veterinary inspection as described above.

Keeping dogs on chains is unfortunately not banned by law, however the length of the chain that the animal can be kept on is regulated by a town’s and municipal’s decrees regarding ways of keeping pets. Also, dogs on chains are subject to general provisions of the Animal Protection Act.

Town and municipal decrees in the Republic of Croatia are available on the internet; if the length of the chain is shorter than the minimum allowed, you should call the communal inspection.

If the chain is hurting the animal (too narrow, cuts in, too heavy and similar), this is considered animal abuse and it should be reported to the veterinary inspection and the police. The written report should be sent if the dog on the chain is subjected to hunger, thirst, weather conditions and it is completely unable to move around and if it is obvious that he is malnourished, sick and behaves lethargically.

In cases of poisoning, serious abuse and killing animals the police should be called straight away as this is a criminal offence.

Apart from article 205 of the Criminal Code, you can also quote article 30 of the Public order and peace act (Official Gazette 5/90, 30/90, 47/90 and 29/94) that bans the torture and killing of animals in public places (if the event occurred in a public place):

A person who keeps animals that can hurt or endanger citizens without supervision and without due care or a person who abuses animals in a public place or treats them badly in another manner, will be punished by a monetary fine.

Inappropriate acts by vets can be convicted, for the worst offences, by article 208 of the Criminal Code.

Veterinarian or a veterinary assistant who in rendering assistance, examination, vaccination or treatment of animals does not comply with the rules of the veterinary profession, which then results in an illness, significant worsening of illness or animal death,

shall be punished by imprisonment of up to one year.

Inappropriate and unprofessional behaviour of vets can be reported in Croatia not only to the Municipal State Attorney but also to the veterinary chamber.

Hunters who wound and kill dogs and cats, within hunting ground or outside of it, equally break the law just like any other citizens.

The Hunting Act allows hunters to "remove" dogs and cats that "roam the hunting ground without supervision within 300 metres from the owner's habitat" (Article 55, paragraph 2), where "removal" is not defined as killing, which is how the hunters usually interpret it.
Hunters are not responsible for animal care and they are not allowed to use their weapon to remove pets.

If a hunter suspects that an animal has rabies, he can catch it using food as bait or shoot it with tranquilliser darts and take it to a veterinary station to be quarantined. Wounding and killing dogs and cats by hunters can be reported to the previously listed institutions and the hunting inspection.

Apart from reporting the hunters who kill a dog or a cat, hunters should also be reported if they are walking outside of the hunting grounds with the gun out of its holder. The area that is within 300 metres from the populated area is not considered hunting ground.

If a hunter shot an animal that is under your care, you should call the police due to the violation of the article 205 of the Criminal Code, and it is a good idea to inform the Hunting Inspection too. You can find the list of hunting inspectors here.

You found an abandoned animal:

If there is an info-centre or an animal shelter in your town, you should contact them first and follow the instructions they give you. If there isn't one, your first stop is a vet who can read the chip and therefore find the owner. This can be done in any veterinary surgeon, so you can go to the nearest one to you.

There are no cat shelters in the Republic of Croatia. Some shelters will admit an injured cat but only for treatment.

Cats can be helped by neutering and returning to the area they were taken from.

You want to find a home for an abandoned animal:

Write a story, where the animal was found, how, describe their habits and character and state what kind of home you are looking for, how does it get on with other animals and people/children.

Nice photos are a necessary condition for successful fostering, so do not hesitate to post a few photos, not just one; make them clear and of good quality.

There are many places where you can advertise animals for free, here we list some of the most visited: 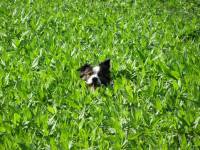