On Saturday, June 30, 2007, groups and citizens of United Kingdom, Germany, the Netherlands, USA, and Croatia will celebrate the World Whale and Dolphin Day in various ways for the first time.

President of Animal Friends, Luka Oman, has sent a protest note to His Excellency Tetsuhisa Shirakawa, the ambassador of Japan in Croatia, calling for the prohibition on slaughtering of dolphins, which is currently done by Japanese fisheries, as well as trading with live dolphins for the captivity industry, both in Japan and abroad.

Beside this protest note, Animal Friends has sent a letter to the Nature Protection Directorate at the Croatian Ministry of Culture, demanding an urgent ban on all forms of capturing and exploitation of dolphins and other sea mammals from the Cetacean family on the territory of Croatia. The request received a positive answer in late April.

Today, threats to dolphins and whales are huge and varied caused by fishing net entanglement, captivity, whaling, industrial pollution of the oceans and military use of intense sonar waves is known to harm and even kill cetaceans.

Why is the World Whale and Dolphin Day primarily focusing on Japan? Perhaps the best answer to this question can be given by describing the annual dolphin hunt in that country. The hunting strategy consists of about fifteen ships spreading their fishing nets and driving the dolphins towards the sandbanks. There they capture the dolphins by forming a circle around them or driving them further to the shore. Enclosed in small space or driven to the sandbanks, dolphins begin to swim frantically in circles, while fishermen pierce them with hooks and harpoons and drag them onto the ship deck. The dolphins are then processed for food or fertilizers. Each year 20 thousand dolphins are slaughtered in this way.

Animal Friends is of the opinion that Japan and all the other countries engaging in this bloody practice should build their reputation on respecting the lives of these intelligent creatures rather than mindlessly hunting them down and killing them. Perhaps Croatia could act as an example in this respect by protecting the dolphins and other sea mammals?

On Saturday, June 30, Animal Friends will have an info stall at the corner of Varsavska ulica and Petar Preradovic Square, where visitors will be able to watch a film on the massacre of dolphins from 10:00 A.M. Members of Animal Friends will hand out leaflets made for the occasion of World Whale and Dolphin Day and offer additional information on the issue. 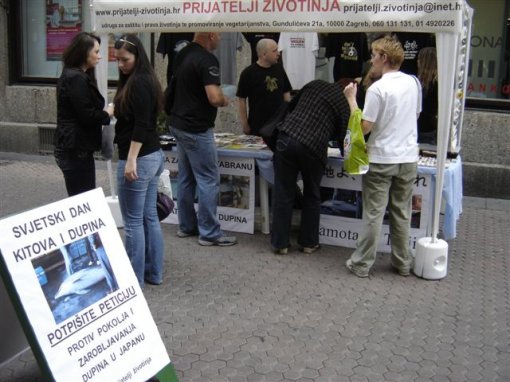