Roche, Novartis Pharmaceuticals and GlaxoSmithKline - responsible for death of animals

On the eve of marking the first Day of Fighting Animal Experiments, Animal Friends organizes two demos so as to put into spotlight companies Roche and Novartis Pharmaceuticals, which directly finance the most notorious and largest European animal testing lab Huntingdon Life Sciences (HLS) in England!

Huntingdon Life Sciences, Roche and Novartis Pharmaceuticals unfortunately are not the only ones to kill animals behind the firmly secured laboratories' doors. Glaxo Smith Kline company also funds cruel and unnecessary animal experiments.

With these demos Animal Friends announces and invites the Croatian public to join a protest on the Day of Fighting Animal Experiments on Friday, June 21, 2006, and thus mark the first anniversary of the beagles rescue from the Faculty of Veterinary Medicine in Zagreb.

By not forgetting the beagles, let us all raise our voice against Roche, Novartis Pharmaceuticals, GlaxoSmithKline, Pliva and HLS, as well as other companies and animal testing labs that are making a fortune by killing and torturing animals, but are also a great risk to the health and safety of people!

"Animal testing persisted and still persists because it provides a legal sanctuary for pharmaceutical companies. In fact, it is itself fundamentally malpractice. There is always less than a fifty-fifty chance that a medication tested on animals will provide the same results in humans… usually much less. This is not science. It is expensive and dangerous gambling." – an excerpt from Sacred Cows and Golden Geese, C. Ray Greek, MD and Jean Swingle Greek, DVM, 2000 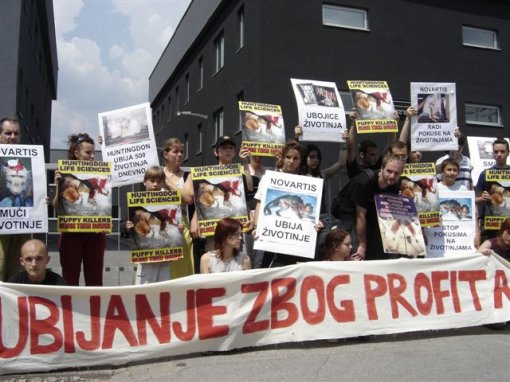