Animal Friends and Croatian citizens complain about a circus with animal acts, the Circus Gärtner, on the Island of Vir, against which they announce a protest

It has been two weeks since Animal Friends started to receive numerous messages from shocked citizens who were terrified to see under what conditions animals are being held at the notorious circus Gärtner, on the Island of Vir.

However, this entire circus contains 40 different animal species on an area of 70 m2, being located at the main traffic road at one entrance of the Island of Vir. The majority of the animals is locked up in trucks, while some of them, like camels, are placed in the small space 1 m2 and elephants are chained and held in bad condition. Since the area where animals are located doesn’t have any shade or fresh water supply, there's a nasty smell; the animals might suffer from different disease, infections, dehydration, and serious psychological problems.

As soon as the first message was received, Animal Friends reported the circus to the municipal authorities, police administration, competent Veterinary Inspection, and also Health Inspection, considering the fact that the Island of Vir doesn't have water supply at all. Nevertheless, the circus got the permission to stay there until the August 8. Despite the citizens reaction and denounces to inspections, their stay is extended until August 15 and, according to the rumors, until August 21. This shows an absolute malfunction of inspections and municipal powers, and also ignorance towards citizens' and tourists' discontent, who consider this fact a big shame for all of Croatia. It is clear that except of malfunction, there is something more about the private interests of the owner who rented that area.

Animal Friends activists (with the great citizen support) protested in Krizevci, Dugo Selo, Sisak, Velika Gorica, Samobor, and Karlovac against circus Gärtner with its animal acts, further protests against the same circus have been held in Umag, Pula, Zadar, and Sibenik.

Animal Friends announces another protest against circus Gärtner and its animal acts on Thursday, August 18, which will be held in front of the same circus at 12:00 noon. While holding up banners, shouting slogans, and handing out leaflets, activists will inform the public about the circus' cruelty with their animal stunts and the horrible conditions the animals live under.

It is a big shame for Croatian cities to have circuses with animal acts, which hide man's abuse of animals and animal performances, like the ones of this notorious circus Gärtner on the Island of Vir which must be condemned.

There are no legal standards within one can regulate the treatment of circus' animals, their accommodation, transportation, and all those stunts they are forced to perform. Let us not forget that these animals are wild and they are not accustomed to travel, experience different climates, learn tricks and stay in captivity. Except of physical tortures during their training, animals experience stress, since they have been taken far away from their homes and brought in the world of "fun," which for them is a world of lifetime prison as well as difficult and pointless acts. These animals are unhappy victims of man's manipulation. Their physical, social and other needs are ignored from those who profit from their exploitation.

Animal Friends demands a and work on the change of the Animal Welfare Act, and demands the legal ban of circuses with animal acts, as more and more countries worldwide do. Independently of the legal ban on the governmental level, we would like to appeal Croatian cities to join hundreds of cities worldwide on their own initiative that already banned circuses with animal acts. Some of the countries and cities who already banned circuses with animal acts are Venice, Barcelona, as well as Singapore, Greece, the United Kingdom, Sweden, Finland, the United States of America, Israel, Australia, Austria, Belgium, Costa Rica, India, and Denmark. Reasons of this ban are horrible cruelties used in training, transportation and bad accommodation of circus animals. 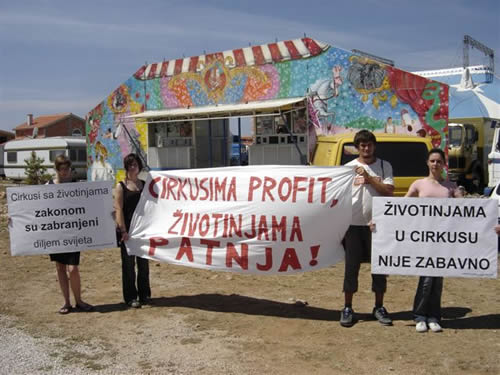 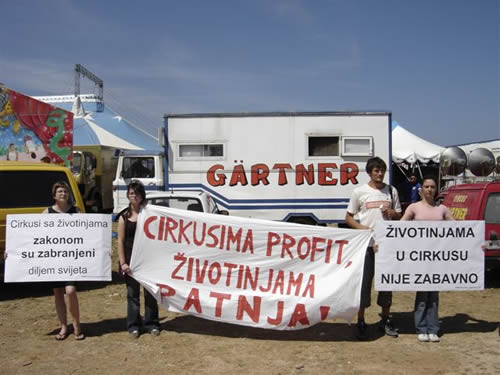 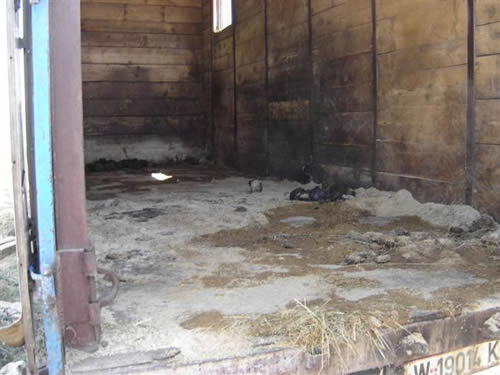