12/13/16 Animal Friends will House all Chinchillas!

- A public hearing until December 20: say no on killing for fur; even 10 years of the transitional period was too much!

Even the birds in the trees know that, in Croatia, animal breeding for fur was banned in 2006 and that it should take effect on January 1, 2017. But the Ministry of Agriculture, due to pressure from the few remaining breeders, opened a new public consultation in which it is proposed to extend the transitional period for chinchilla breeders until January 1, 2018, while chinchillas remain the only animals in Croatia that are being bred for fur.

The proposal for a change started as an emergency procedure, as if it was a national priority and not a suggestion for retrogression of legislation that is the pride of the entire Croatia and serves to protect the defenseless. It's completely absurd that a few weeks before the expiration of the transitional period, its extension is being proposed.

As a reason for extending the deadline, breeders have claimed chinchillas are too young for removing their fur and that pregnant female chinchilla should be killed if the transition period is not extended for another year. Animal Friends does not consider this necessary because all these breeders have been able to do it at least ten times so far. Instead, AFC is proposing that, with the help of the citizens, the organization will house all chinchillas.

The large majority of breeders repurposed their businesses after a few years from the beginning of the transitional period. Even the Ministry itself called a transitional period of 10 years "appropriate" for the cessation of production. The remaining minority of only 30 breeders deliberately ignored the legal provision prohibiting the breeding of animals for fur with the goal to undermine the ban on fur farming. With the extension of the transitional period, petty profiteering interests would be favored, which would bring legal instability into Croatian legislation.

While debating back in 2006 on whether the transitional period should be five, seven or ten years, the extremely long ten-year transitional period was agreed precisely in order to avoid even the possibility of failure to implement this important legislation. Extending this period would constitute a violation of human and animal rights, negate the very essence of how the country functions and contradict the will of the majority of the Croatian public.

Animal Friends has been contacted by many shocked and disappointed citizens who feel cheated and deceived. Again, the votes of citizens will now decide whether chinchillas in Croatia are to spend yet another year of their life suffering with small cages, disease, abnormal stereotyped behavior, disorders in reproduction, offspring mortality and ultimately, a brutal death for their fur.

The association invites everyone to leave a comment at a public hearing and oppose the extension of the transitional period caused by pressure from interest groups. Animal Friends asks for the praiseworthy fur farming ban to take effect on January 1, 2017, and the organization is offering its help in accommodating chinchillas. 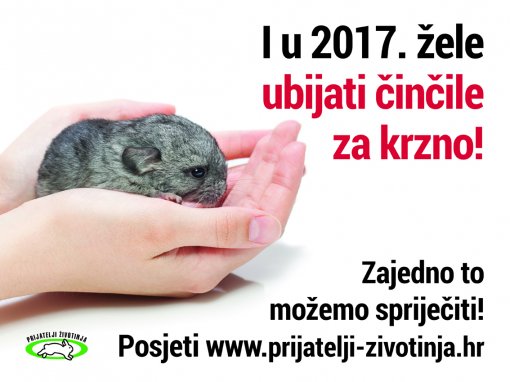