Animal Friends and Kristina Vilk have launched the campaign "Hunt Results, Not Animals"

- Miss Sport Croatia in a campaign for animal victims of hunting!

Animal Friends and the current Miss Sport Croatia, Kristina Vilk, have joined forces in a new campaign called "Hunt Results, Not Animals." By posing for ads that will be displayed in Zagreb, Krapina, Varazdin, Osijek, Pula, Rijeka, Split, Zadar, and elsewhere, Kristina Vilk has become the first model for animal victims of hunting in Croatia. Besides the billboards, this beautiful Miss will on postcards printed for the occasion appeal to the people to show compassion for wildlife.

Even though hunting tends to be promoted in Croatia as sport and a part of the tourist offer, it is only a primitive and violent form of "entertainment" and a form of sadism commit against other living beings. As such, it is an insult to sport and sportsmen, as well as shameful to Croatian tourism and the ethical values of the 21st century.

Under the motto of the so-called care for the environment and for animals, the "kill-off" is a demonstration of human domination over other animals, who have no possibility of defending themselves and saving their lives.

It is a disconcerting fact that the Croatian hunters possess around 100,000 pieces of different firearms! They are tolerated even when they behave arbitrarily as a sort of "local sheriffs," and they are often involved in the illegal activities of intentional killing of cats and dogs.

Owing to the hunters, several animal species such as the brown bear, the wolf, and the griffon vulture have been brought to the brink of extinction in Croatia. Their intentional proliferation in certain areas has created problems that tend to be solved by renewed massacres, while the hunters increasingly breed these animals in enclosed areas in order to release and kill them later, or sell the license to kill them to foreigners for a fee. According to the data of the Croatian Hunters' Association, as many as 5,000 foreigners come to kill animals in Croatia!

Shocked by these data, Kristina Vilk, Miss Sport Croatia and runner for the Athletic Club Agram from Zagreb, has readily accepted the invitation of Animal Friends to join the campaign for animals that are victims of hunting.

"Every living being has received life as a gift and it is extremely inhumane that people should be allowed to take the lives of innocent animals and their right to live, simply because they find it amusing or for other selfish reasons," Kristina says.

The photo session with Kristina Vilk for the campaign "Hunt Results, Not Animals" took place at the athletic course of Mladost Sports' Centre. Kristina's attractive look is accentuated by the makeup artist Nives Spajic, photographs were shot by Marina Filipovic Marinshe, while the poster and the postcard were designed by Maja Zaklan from Dizajn studio Zale.

The campaign with Croatian Miss Sports is supported by Zagrebacki holding d.o.o., Department for the Maintenance of Sports Facilities, the National Foundation for Civil Society Development, Iskon, Zale, Europlakat, Arto, Vectoredesign, and Kerschoffset. 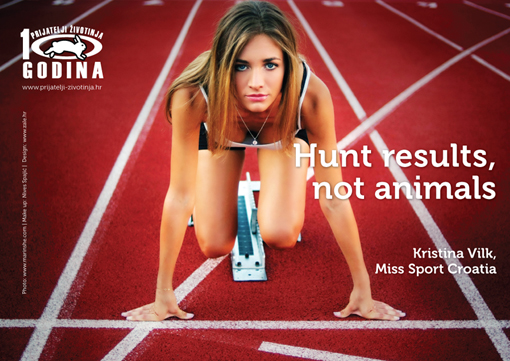