This year's International Whaling Comission (IWC) meeting will be held on June 20 in Morocco. Japan and other countries that profit from whaling will try to lift the ban on whaling which has been active for 24 years and thus get approval for killing 12,000 whales a year.

Animal Friends emphasizes that the attitude of Croatia, which has been an equal member of the IWC since 2007, opposes the permission to the slaughter of whales and wants to strongly condemn the attempt to legalize the massacre in world's oceans. On this occasion Animal Friends collaborates with the global organization Ocean Activists United, whose goal is the protection of the oceans and all marine inhabitants. Animal Friends expresses its support to the Sea Shepherd Conservation Society whose direct actions in all oceans oceans resulted in saving 500 whales from harpoons last year only.

Animal Friends will set up a large art installation on Sunday, June 13, at the Zagreb Bundek Lake which will show the ocean as it once was and as it is today. By doing so, the activits will warn of the extreme vulnerability of the sea and the ocean due to fishing of marine mammals and fish, and the necessity of presenting a clear position for the protection of whales, but also a clear need for cessation of use of fish meat in human consumption.

Hundreds of thousands of fish die suffocating in pain in fishing nets every day and fishing has a large impact on the sea and oceans as they once were. Ruthless human destruction of the sea and the ocean reached proportions that hadn't been dreamt of before, and today the world's oceans look like frightening vacuums that hardly remind of the times when they flourished in life. Thousands of species of living organisms grew extinct due to excessive fishing and with the aquatic farms the suffering of animals and pollution of the water environment increased further. Since the water covers 70% of the Earth, when the Ocean dies, our Planet dies as well.

Hunt of large marine animals and shells caused a disturbance in the food chain and had such a detrimental effect on many ecosystems that marine life changed forever. Whales are killed with harpoons that penetrate their entrails before exploding in the body. Although harpoons are powerful weapons, they rarely cause immediate death of the whale. Whales can die up to an hour after the harpoon attack.

In addition to hunting, the marine animals are threatened by many forms of pollution – from the release of chemicals and dump of waste to oil leaks. The situation in Mexico shows a shameful act in the tragedy that doesn't seem to have an end and should not end in the complete destruction of the seas and oceans.

On the occasion of World Whale and Dolphin Day, which is marked on June 30, Animal Friends appeals to individuals to join them in saving the oceans and educating and sharing information about problems that occur where we do not see or do not want to see them. No matter where we live, everyone of us affects the seas and the oceans and all their inhabitants with our attitudes, diet and lifestyles in general.

Animal Friends also invites the public to see the Oscar-winning documentary "The Cove" which deals with the topic of dolphins in Japan in a powerful, intriguing and emotional way. This excellent film is shown in various theaters in Zagreb and other Croatian cities. 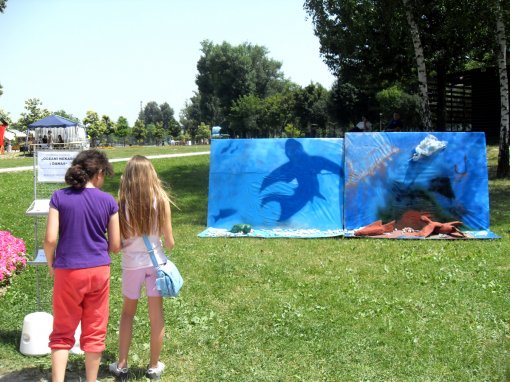